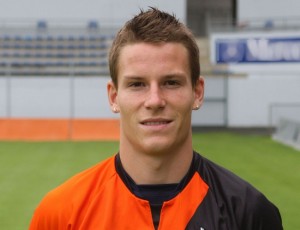 PSG have completed the signing of Lorient striker Kevin Gamiero. Moments after his signing he gave an interview to PSG.fr where he explained his decision to move the the French capital, despite interest from a number of Premier League clubs.

Kevin, you’ve literally just signed for PSG. What are your first feelings?
“I’m very happy and very proud. It’s my home club. My family and friends are here. I’ve always dreamed of playing at the Parc des Princes, scoring goals in this stadium. It’s fantastic! I really love PSG. I’ve supported the club since I was a kid. They’ve got a very exciting project here.”

You had a lot of clubs chasing your signature. In the end, the fact that PSG isn’t playing Champions League football next season wasn’t a factor…
“No. I thought long and hard about my transfer. I chose PSG because it’s a huge French club. I think next season, the club could have a really great campaign. And PSG is my club!”

Did Laurent Blanc’s words of advice influence you?

“All the media were at that press conference. I took his words into account. We’re one year out from Euro 2012 and you shouldn’t take too many risks. I’m really, very happy.”

You hail from the Paris region. Did you go to the Parc des Princes when you were younger?
“I went to several matches with my dad. They were always great games with a fabulous PSG team. I really liked Marco Simone. When I watched PSG play, I used to tell my parents that one day I’d be out there! That’s going to happen next year. I really liked Simone’s style. He was a pure striker with fantastic instincts.”

Have you set yourself any aims, both personal and collective, for the coming season?
“For myself, my aim is always to do better than the season before. I will try and have a good preseason and adapt to my new club and teammates as quickly as possible. We’ll see what happens from there. We know we have to have a good season. We need to make a good start to the championship.”

Every season you’ve been a pro, you’ve scored more goals than the season before. So next season you’ll score at least 23 next year…
“Touch wood! I’ll be trying to get there, but the key is to have a good preseason. My understanding with my new teammates will develop during the preseason friendlies and during the first games of the championship. I’m not worried about that.”

Everton are thought to be chasing Lorient defender Ecuele Manga, who has impressed in Ligue 1 this season.

It’s also claimed Lille, Marseille and PSG have been alerted to the qualities of the Gabon international, who moved to his current club from second division Angers.

The 22-year-old’s existing contract with Lorient still has three years left to run, but the central defender admits he is flattered by the interest particularly from Everton boss David Moyes.

“I am delighted with all this attention on me,” Manga told skysports.com.

“I have a contract until 2014 but Everton is a fantastic club and I would be delighted to even be considered for their team.

“I love the passion at Goodison Park. But like I said, it is only paper talk and neither I nor the club have been approached.”

Thil joined Boulogne back in 2007 and has been influential for them over the past four seasons, including helping them to achieve promotion to Ligue 1 in 2010 with 18 goals that season.

Dijon who recently won promotion to Ligue 1 will be looking to strenghthen over the summer to give themselves every chance of avoiding the drop at the first time of asking. A proven goal-scorer such as Thil will be a welcome addition to their squad.

Last night saw the final round of games from this seasons Championnat National.

The big winners were Guingamp who secured their promotion back to Ligue 2 and Gap who survived the drop.

Guingamp knew going into the game that a point would be enough for them to secure promotion as Strasbourg had already completed their games the week before. They got off to a great start and were 2-0 up away at Rouen after just 30 minutes thanks to goals from El Jadeyaoui and Mathieu Scarpelli.

Rouen pulled one back just before half-time to add a little tension to predcedings but Guingamp secured the victory and thier promotion thanks to a second goal from El Jadeyaoui after 73 minutes.

Gap also went into their game with Creteil knowing that a point would be enough to save them from relegation. Things started to look shaky for them just before half-time when they conceeded a penalty. As things stood at half-time Gap were still safe as Bayonne and Rodez were not leading in their games.

Gap started the second half strongly equalising after three minutes from a goal by Bouyarmani, this turned out to be the final goal of the game and Gap had done enough to survive.

Bayonne had done their part by beating Cannes 2-0 at home, but Rodez were unable to win their game at home to Niort, where they drew 1-1. These results saw Bayonne and Rodez join Plabennec, Alfortville and Gueugnon in being relegated to the CFA.

So a great season for Bastia, Amiens and Guingamp who have been promoted to Ligue 2. 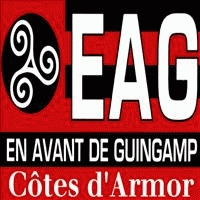 Tonight is the final round of games in the Championnat National.

There is still much that can be decided tonight at the top and the bottom of the table.

Currently both clubs have 77 points but Strasbourg sit third as they have the better record in results between the two teams. This means that Guingamp need at least a point away at Rouen to win promotion.

Rouen currently occupy 8th spot and have nothing left to play for this season, however they will not make it easy for their visitors in what should be a very close and tense game.

It also looks likely to be a tense night at the bottom of the table, with three teams fighting for safety, but two of them will be relegated.

Gap currently sit one place above the relegation zone on 42 points and  look to be the favourites to survive but Bayonne and Rodez who both have 40 points will be looking to leap above them to safety.

A point for Gap will be enough for them to confirm their survival, but should they lose then a win for either of the teams below them will see them relegated. If both Bayonne and Rodez win, Bayonne will come out on top thanks to their results against Rodez this season.

It is a complicated situation at the bottom and at this moment it is difficult to call.

Elsewhere there is nothing else to play for except the golden boot award which looks to be between current top scorer Thibault Giresse of Guingamp who has 21 goals and second placed David Suarez of already promoted Bastia who has 20 goals.

All matches kick off at 7pm GMT