Thil joined Boulogne back in 2007 and has been influential for them over the past four seasons, including helping them to achieve promotion to Ligue 1 in 2010 with 18 goals that season.

Dijon who recently won promotion to Ligue 1 will be looking to strenghthen over the summer to give themselves every chance of avoiding the drop at the first time of asking. A proven goal-scorer such as Thil will be a welcome addition to their squad.

Andre Ayew scored a hat-trick and his younger brother Jordan grab a goal to see off OGC Nice 4-2 at Stade Velodrome last night. A result that sees them hop above Lille into top spot in Ligue 1.

This is the first time Marseille have been top since week 15 of the season and it is a great time to do so with only a handful of games remaining.

Ayew was given the opportunity to play upfront due to the absence of Loic Remy and he took his opportunity with both hands, grabbing a goal in the 30th, 60th and 90th minute.

In the end Nice were well beaten and will look to pull themselves away from the danger zone with a win over struggling Caen on Sunday.

Elsewhere in Ligue 1, Lyon left it late to beat Montpellier 3-2 at the Stade de Gerland. A 90th minute goal from Yoann Gourcuff helped them claim all three points and keep the pressure on Marseille at the top. Ederson gave Lyon the lead after 23 minutes but his goal was cancelled out by Montpellier striker Oliver Giroud who levelled in the 30th minute.

In the second half Lisandro Lopez restored Lyon’s led with a goal in the 55th minute, however Montpellier pulled the game level again in the 84th minute thanks to a goal from Souleymane Camara.

Montpellier looked set to steal a point before Gourcuff came off the bench to score a late winner for Claude Puel’s side.

The race for the Ligue 1 title is getting tighter and all eyes are now on week 34 where L’OM travel to Lyon in a match that could shape the title race.

Lloris has been in excellent form this season, form which has led to strong interest from clubs including Arsenal, Liverpool and Manchester United.

Lyon have the second best defense in the Ligue 1 and Lloris has been at the centre of this fantastic achievement.

Aulas is keen to get a new contract sorted to ward off any interest from the big boys in England.

“I met with Hugo just before he left the national team to inform him that we’re ready to enter the negotiations,” the supremo told French radio station RMC.

“We’d like to have this wrapped up within a month and give him the good terms that he deserves and that Olympique Lyonnais want.”

The 24-year-old has kept 10 clean sheets this season and has cemented his spot as the French No. 1.

Marseille could go top of Ligue 1 tonight if they beat OGC Nice at Stade Velodrome.

L’OM are currently two points behind current leaders Lille after they only managed a 1-1 draw away Lorient on Sunday.

Marseille are flying high at the moment after becoming the first team ever to retain the Coupe de la Ligue thanks to a 1-0 victory over Montpellier on Saturday.

Nice have not enjoyed the best of seasons and will be looking continue their seven game unbeaten run to help pull them away from the relegation zone, they are currently just three points clear of 18th placed Caen.

Elsewhere in Ligue 1 tonight 3rd placed Lyon face Coupe de la Ligue runners-up Montpellier at Stade de Gerland, as they look to keep up the pressure on Marseille and Lille.

Both games kick-off at 6pm GMT. 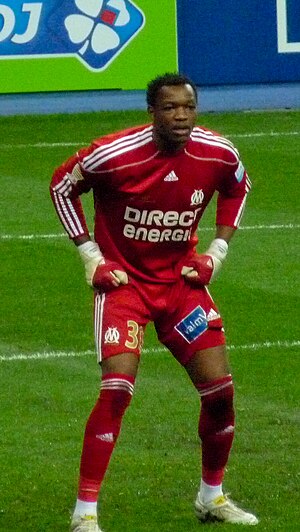 Marseille goalkeeper Steve Mandanda has admitted that he would love the opportunity to ply his trade in the English Premier League.

The France international who currently plays for Marseille is under contract until 2013, but he has refused to rule out the prospect of making a move to England at some point in the future.

The 26-year-old claims to be fully focused on Marseille’s Ligue 1 title pursuit for now, but has revealed there is a chance he could soon be on his way out of the club.

“I am focused on the end of the season at the moment. It is an important time for the club and for my future.

“Maybe my future will depend on the final few games, but I am not obsessed with the need to secure a move.

“I can either stay or leave. One thing is for sure, I feel happy at Marseille and would have no problem staying.

“If I were to leave, I don’t believe there is a club in France that are better than Marseille.

“Which country attracts me the most? England. For me it is the best league in Europe.

“I also like the Spanish league. But the two biggest clubs in Spain already have huge keepers.”